In New York, a View of Even a Small Park Adds Value

An apartment on Central Park has long commanded a premium, but as real estate prices have soared, blocking all but the most affluent from buying a perch there or along one of New York’s other premier greenswards, developers have increasingly sought out sites on smaller, non-marquee parks.

An address on Isham Park or Herbert Von King Park may not have quite the same ring as one on Prospect Park or Gramercy Park, but in a market where buyers can become dizzy trying to distinguish one marble-kitchened, white oak-floored condo from another, a view of treetops swaying outside the living room window is a distinctive edge. 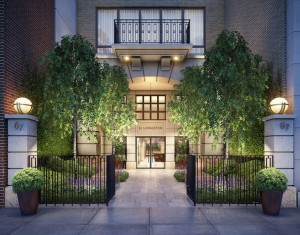 In Brooklyn Heights, 67 Livingston hopes to guarantee buyers protected views with a location overlooking a schoolyard, next to two historic districts. Credit Rendering by Redundant Pixel

Even more significant, an apartment on even a pocket park comes with more light, air and open sky than an identical unit that faces another building — and a near-guarantee that no towering new development will take those advantages away.

“You have these little oases, these enclaves within the city, and it creates an opportunity,” said Josh Schuster, the founder and managing principal at Silverback Development, which has several park-adjacent projects in the works. “In New York, the light and air window is usually the width of the street. When you walk into an apartment that’s across from a park and there are large windows to showcase that, I definitely think there’s a wow factor.”

Far from a happy accident, finding development sites on small parks “is very much a conscious strategy,” Mr. Schuster said. “We map out a bunch of city and state parks and then we walk around. In addition to parks, we also map out landmark buildings — places where you know the views will be protected.”

He said that he spent seven years assembling the site for 75 Kenmare, a seven-story condo under construction in NoLIta that will overlook DeSalvio playground. The project is being developed by DHA Capital, where Mr. Schuster worked previously.

Another site, on Second Avenue and East 21st Street, is across the street from Peter’s Field, a blocklong stretch of basketball and tennis courts. And at 67 Livingston Street in Brooklyn Heights, where Silverback is converting a former college dorm into condos, one side of the building looks down on the schoolyard of the Packer Collegiate Institute, where on a recent afternoon children were jostling for control of a big red ball.

While such parks may lack the splendor of Central or Prospect Parks, unsung green spaces can claim near-equivalent benefits: In addition to extra light and sky, many offer playgrounds, dog runs, farmers’ markets, a bench to read a book, or a lawn for a picnic.

Many cities prize their waterfronts above all else, but Jonathan J. Miller, the president of the real estate appraisal and consulting firm Miller Samuel, said that New York is a bit different. “One of the things about Manhattan is that we’re inward looking,” he said. “We’re more into our park views than our water views.”

Which could have something to do with Robert Moses, the major builder last century of New York City infrastructure — and the fact that nearly all of Manhattan’s waterfront views have highways in them. But whatever the reason, living on even a small park does make a difference to buyers. And, ultimately, the apartment’s value.

When it comes to pricing, however, expectations should be modest: According to Mr. Miller, apartments on Central Park are only about 10 to 15 percent more than those on a side street if they’re below the tree-line, and 15 to 25 percent more if they’re above. And any analysis of prices for park-facing units comes with a caveat: Developers are more likely to put the largest apartments where the best views are, and there’s also a premium for more contiguous space.

And, he added, “while there’s an aesthetic of openness that people gravitate to,” there is a difference between living on a tiny Moses-era playground and a Frederick Law Olmsted masterpiece like Morningside Park “that has been a stalwart of the neighborhood for many years.” 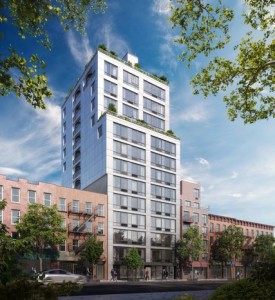 At 1790 Third Avenue, a condo tower in East Harlem, the strong sales can be attributed in large part to the location on Cherry Tree Park, said Yair Tavivian, an associate broker with Douglas Elliman. Credit Rendering by Christopher Shelley

Toni Martin, an associate broker with the Corcoran Group, said that anytime she has a listing on a park — be it Von King Park in Bedford-Stuyvesant, or Washington Park in Park Slope — it gets snapped up fast. Fort Greene Park is such a huge draw that she’s seen bidding wars for condos in townhouses half a block away. One of her clients lost a bidding war for a 950-square-foot two-bedroom in one such building. “It was a nice apartment, but nothing overwhelming. And it was a fourth-floor walk-up!” Ms. Martin said, adding that the place sold for $125,000 over the asking price.

“In a city as dense as New York, to live next to something green is a beautiful thing,” she said.

Of course, not all buyers come to tour a new condo with a strong desire to live on a small square or playground whose name they might not even know.

Fred Duck, who works in marketing at Bloomberg, recently bought a one-bedroom at 1790 Third Avenue, a condo project across from Cherry Tree Park in East Harlem.

“To be honest, I’d never been to that park,” said Mr. Duck, who previously owned a condo on Second Avenue and East 92nd Street. “But I had just come back from working in Hong Kong for several years, where I lived very high up, on the 37th floor. I got used to that light and I wanted to find something that wasn’t just looking into an adjacent building.”

The advantage is real enough that developers are keen to play up any nearby green space. In Jersey City, Fields Development staked out a site by St. Peter’s Prep’s football field for its new luxury rental, Lenox, which will also have a courtyard open to the public.

And in Williamsburg, Brooklyn, Brookland Capital is building condos at 850 Metropolitan Avenue, across the street from a small community garden in Orient Grove, a tiny .149-acre triangle park.

“I won’t tell you the site was appealing just because of the community garden,” said Boaz Gilad, the chief executive and a founder of Brookland. “But if I can give you a park, I will.”

Brookland’s condos are priced to attract younger first-time buyers — a price point that “can’t usually afford to be on a park.” But Mr. Gilad said that buyers and renters like “even a small piece of greenery they feel like they can have access to.” 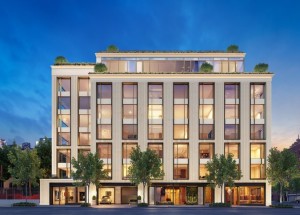 In NoLIta, 75 Kenmare, a condo being developed by DHA Capital, will benefit from its position next to DeSalvio Playground. Credit Rendering by Redundant Pixel

While not all New Yorkers warm to the sound of children’s happy shouting, even the developers of new buildings with significant private outdoor amenities consider a small public park to be a significant boon. At Extell Development’s Brooklyn Point, a 68-story condo tower rising in Downtown Brooklyn, residents will have access to the highest rooftop pool in the Western Hemisphere, outdoor showers and a stargazing observatory. But Ari Alowan Goldstein, a senior vice president for development at the company, considers Willoughby Square, the one-acre park the city is building across the street as part of the Downtown Brooklyn Redevelopment Plan, to be on par with those perks.

“In my mind, parks are one of the best parts of New York and the perfect complement to the built environment,” he said. “I spend my weekends taking my 20-month-old daughter to different Brooklyn parks.”