New and Noteworthy: A Selection of Exceptional Luxury Rentals

A Grandson Wants to Do His Grandfather Proud

The rocker-turned-designer is designing the interiors for Dan Hollander and Josh Schuster’s mixed-use project, according to a teaser site that went live Wednesday. The project, which will have 35 condos and two commercial units, is aiming for a total sellout of $127 million, according to an offering plan filed with the attorney general’s office.

In addition to Kravitz Design, the new teaser website said Douglas Elliman’s Fredrik Eklund and John Gomes are handling sales and marketing. Andre Kikoski Architect is designing the exterior. DHA is developing it in partnership with AMS Acquisitions and First Atlantic Capital.

The condominium will be comprised of one- to four-bedroom units, ranging in price from $1.7 million to more than $12 million, a DHA spokesperson told The Real Deal. 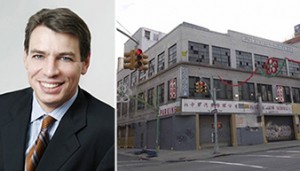 From left: Dan Hollander and garage at 75 Kenmare

DHA, founded by Schuster and Hollander in 2011, went into contract last spring to buy the three-story garage, at the corner of Kenmare and Mulberry streets, for $50 million from Ding “John” Wai’s Sentry Operation Corp. The deal hasn’t yet hit public records.

A slew of broker lawsuits followed, with Nest Seekers International, Century 21 and P. Zaccaro alleging that DHA owed commissions on the sale. The cases are pending.

The building’s two cellar levels will house a parking garage with 150 parking spaces, according to building plans.

75 Kenmare is DHA’s 10th project. The developer is also behind the 37-unit residential building at 50 Clinton Street, where current listings include a one-bedroom asking $1.1 million and a two-bedroom penthouse asking $3.5 million. It’s also behind the eight-unit boutique condo at 12 East 13th Street in Greenwich Village and a 280-unit luxury rental at 535 West 43rd Street in Hell’s Kitchen.