In an exclusive reveal, Silverback Development has officially launched sales for Hero LIC, a new condominium building at 24-16 Queens Plaza South in Long Island City, Queens. The Serhant Team at Nest Seekers International will serve as the sales and marketing agent for the property. 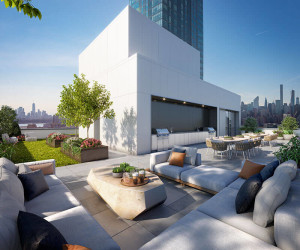 Designed by Woods Bagot Architects, Hero LIC features an asymmetrical undulating form that incorporates a series of residential balconies that increasingly cantilever out as the building rises. Beyond making an aesthetic statement, the design helps maximize interior space and views of the surrounding neighborhood.

As previously reported by YIMBY, the building will contain 109 condominiums that range from studios to two-bedroom units with prices starting at $500,000. The building also supports more than 15,000 square feet of amenities including a Zen garden, a 3,000-square-foot veranda, a deck and interior lounge at the roof level, and a fitness center.

The announced completion date for the project is fall 2019.